In the 14th century bathing was still popular, although did wane as the century progressed due to fears of the plague. But the best way to stay fresh in the 14th century was to have the proper undergarments. The underdress was meant to absorb sweat and body oils and help protect the subsequent layers from odors. This layer was often white linen which was known to wick moisture away. It would be changed daily, and washed frequently and laid out in the sun to bleach out bacteria and odors. Often times people also would have body rubbing cloths that would be used for daily scrubbing of the body.

Please do not use polyester or silk for tightly fitted body linens- they are not breathable, nor wick- you will overheat and become a sticky, stinky mess. Linen is best for fitted undergarments, It will wick away sweat and odors keeping you cooler. Cotton can be substituted, but often just makes you feel damp instead of wicking away the sweat, and grabs onto odors holding them within the fibers.

There are quite a few different sources of undergarments throughout the 14th century, both written and depicted in art. There seems to be 4 basic styles of underdresses.

1. Full Untailored underdress- You can see many full or 3/4 sleeved garments depicted in the artwork earlier in the 14th century. These garments are loose and long. Thy are cut like simple tunics and have no shaping. These are often seen on working women. This was the go to standard for most of the population, due to ease of construction, functionality, and ability to hold up to washing.

2. Tailored underdress- Most visual depictions of underdresses for the noble classes are very similar to the image on the left. A slightly shaped garment, to mid calf with 3/4 or longer sleeves and a neckline low enough to not show when under other layers. This garment wasn’t laced or buttoned, so just loose enough to be pull over while still being tailored. Many depictions of noble ladies indicate that the fabric was often fine, having see through qualities. 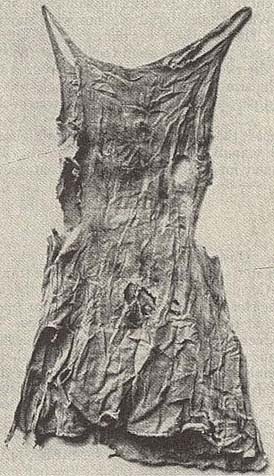 3- slip like underdress- Another common style we can often see is a slip style of underdress. these are sleeveless, with a low wide neckline, and often shorter, to around the knee. Many variations of this are  depicted in the 1389 Wenceslaus Bible- some of which show front lacing. On the left is extent mid 14th century underdress that was of this sleeveless style, although the garment has since been lost. There is also this 13th century underdress of Isabelle de France.

4. Supportive underdress- For women who are bustier and feel that they need more support there is strong evidence for supportive undergarments. In writing there are descriptions of breast band, binding, tightly laced undergarments, and even breast bags sewn into them to support the bust, even early in the 14th century.  There are a handful of visual depictions, like those in the Wencelaus Bible, along with a couple statues.

The Medieval Silkworks blog has an excellent post on Visual sources of supportive undergarments here and on Written Sources here.

This is an in depth look at the “bra” found at Tyrol Castle dated to the 15th century.

Below are a few recreations of Supportive Undergarments

I have had the opportunity to try out all 4 basic styles of underdresses.

I no longer use Untailored underdresses. I tend to wear more highly fitted layers and the bulkiness caused bunching that is uncomfortable. Creases and bunching at the inner elbow under tight sleeves makes any movement painful, plus the simpler cut of the underdress underneath tailored layers restricted the amount of movement of my arms and shoulders. If I wore the less fitted gowns of the early 14th century it would be fine.

A Tailored underdress is my preferred style because it protects my sensitive skin from wool, (or sun if I am cheating on layers at hot sticky camp event) and because of the ability to keep my woolens cleaner. I can use the exact same pattern as I use for the kirtle, adding just enough ease to make it pull over. I suggest making the sleeves full length if you are planing on close fitting sleeves just because it is easier to grab the underdress when putting on the kirtle to prevent it from riding up and bunching in the crease of the elbow. (Ouch!)

I do wear a Slip Underdress. I wear these when I know I will be wearing a LINEN kirtle over it.  So basically at hot sticky camp events, because I have fazed into wearing more woolen kirtles.  Because it doesn’t cover my arm pits I tend to get sweat on the kirtle and I prefer to air out my woolens for a few times before fully washing them. Plus my skin is sensitive and sweat plus wool equals scratchiness and irritation.

I have a love/hate relationship with the supportive underdress.  After seeing many image of kirtles without closures I am convinced that many undergarments would of had bust support/shaping for many women. In fact many of the 1350-1370’s fashion need compression support to achieve the correct silhouette. Many different types of fabrics have a different stretch to them when warm, depending on fabric content and weave, often loosing the support over the course of the day (looking at you tropical weight wools). A supportive underdress solves this problem.

I naturally have a small high bust, so I need gentle shaping more than support. A supportive underdress is a ton more comfortable than any modern bra. But frankly they are more time consuming to make, wastes more fabric than the slip style, I can’t use my same pattern as the rest of my garments, and it has the same sweat pitfalls as the slip dress.  If I was bustier, or if I lined my woolens with linen or used armpit guards I would be more apt to use supportive underdresses.